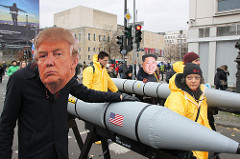 The intensified nuclear arms buildup and the aggressive threat of a preemptive nuclear strike by the US-Administration, the silence of NATO allies as well as the aspiration for nuclear weapons by the regime in North Korea have brought the world to the edge of a nuclear war. Hence we witness a nuclear conflict scenario unmatched since the end of the Cold War. Simultaneously a military confrontation in East Asia is nurtured by the economic and political crisis around the globe that threatens to draw not only the US and North Korea, but also China, Japan, South Korea and Russia into an arms race including nuclear weapons, missiles and missile defense systems.

This highly dangerous situation was foreseeable and could have been prevented by political and diplomatic means. For instance, in 1996 the vast majority of countries have voted for the resolution A/RES/51/45 in the General Assembly of the United Nations calling for the initiation of a treaty to prohibit and eliminate nuclear weapons, including China, India, North Korea and Pakistan. Since then the UN adopted a similar resolution every year, yet in 2007 with an impressive number of 127 countries voting in favour. Nevertheless, the USA and their NATO allies were never part of this international community of states working towards a nuclear-weapons-free world. On the contrary, they compromised serious efforts in this direction and on top of that have fueled international conflicts and arms races by military interventions and expensive military programs.

Today we witness the expectable consequences of these irresponsible policies; the big chances after the Cold War were never taken. In the light of the Korean War 1950-1953, where concrete plans by the US-Administration for a nuclear strike against North Korea existed, there is only one imperative: De-escalation. This conflict endangers the existence of whole humanity and fundamentally questions its livelihood and sovereignty.

The ongoing global economic crisis, the rising social inequality of our time, and the intensified destruction of the environment of our planet as well as climate change demand to keep alive the memory of the horrors of the twentieth century. The Great Depression, fascism, genocides and two world wars, the dropping of atomic bombs on Hiroshima and Nagasaki, as well as the nuclear arms race of the Cold War brought humankind to the edge of self-extinction.

This was made possible by scientists who developed nuclear weapons. Rather late some of them realized their mistakes, among them 60 years ago 18 German nuclear scientists („Göttinger 18“), and tried to bring the nuclear genie back into the bottle. Since then, the responsibility in the scientific community has become an imperative for the preservation of our planet. As members of an association of critical scientists we are working today, 72 years after the first nuclear attacks against urban centers, in the spirit of this imperative. We commit ourselves to the responsibility for the results of our research as a contribution to a peaceful world, worth living in for everyone. The current aggravation of the nuclear conflict between North Korea and the USA is thwarting these efforts.

On the contrary, there is a great chance to eliminate the threat by nuclear weapons for all times. On July 7, 2017, 122 Members of the United Nations agreed upon a treaty to ban nuclear weapons, not including Germany and few nuclear armed states and their allies who continue to hold onto their strategy of nuclear deterrence. Notably the treaty was jointly worked out by government representatives and dedicated people of civil society. To support this treaty is the first and best answer to the current nuclear aggression and escalation.

We therefore request that the German government and all other states sign the treaty designed in the interest of and under approval by the overwhelming majority of humankind. We demand nothing less than the unconditional commitment to the prevention of a nuclear conflict.

We also call upon the people to organize actions of protest and demonstrations in all cities, all universities and all enterprises against nuclear war and to demand the signature of the nuclear ban treaty by the remaining states. No government, no human being shall have nuclear weapons at their command.

Find the statement as pdf here: 170821_Natwiss-Declaration on dangers of nuclear war_lv

Find the statement in German here