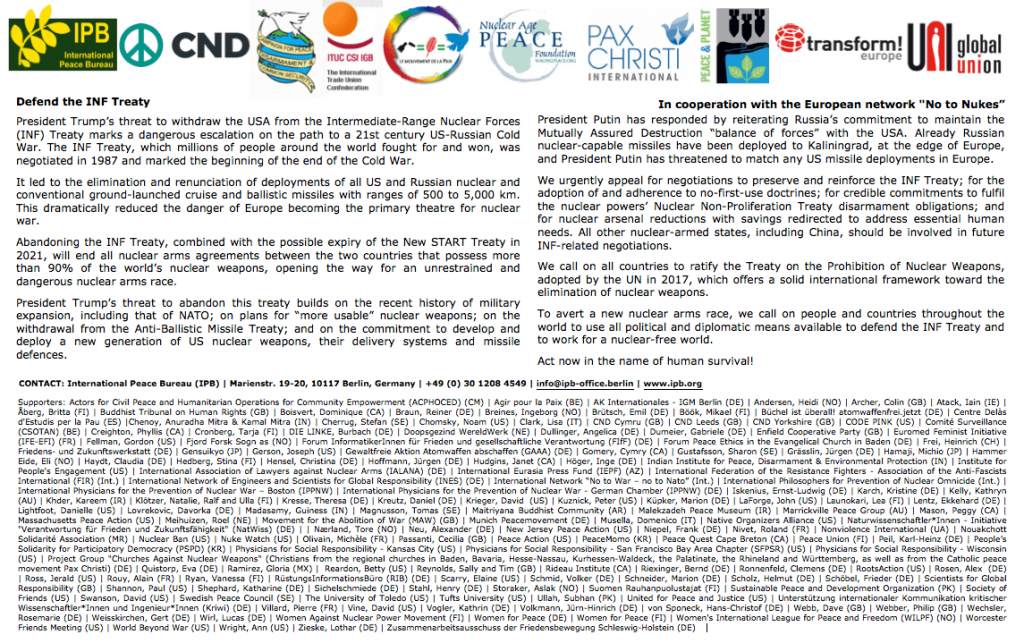 The International Peace Bureau (IPB) and its partners published an appeal to defend the INF Treaty on Saturday, the 8th of December 2018, in the Guardian (page 45). NatWiss also signed the appeal.

President Trump’s threat to withdraw the USA from the Intermediate-Range Nuclear Forces (INF) Treaty marks a dangerous escalation on the path to a 21st century US-Russian Cold War. The INF Treaty, which millions of people around the world fought for and won, was negotiated in 1987 and marked the beginning of the end of the Cold War.

It led to the elimination and renunciation of deployments of all US and Russian nuclear and conventional ground-launched cruise and ballistic missiles with ranges of 500 to 5,000 km. This dramatically reduced the danger of Europe becoming the primary theatre for nuclear war.

Abandoning the INF Treaty, combined with the possible expiry of the New START Treaty in 2021, will end all nuclear arms agreements between the two countries that possess more than 90% of the world’s nuclear weapons, opening the way for an unrestrained and dangerous nuclear arms race.

President Trump’s threat to abandon this treaty builds on the recent history of military expansion, including that of NATO; on plans for “more usable” nuclear weapons; on the withdrawal from the Anti-Ballistic Missile Treaty; and on the commitment to develop and deploy a new generation of US nuclear weapons, their delivery systems and missile defences.

President Putin has responded by reiterating Russia’s commitment to maintain the Mutually Assured Destruction “balance of forces” with the USA. Already Russian nuclear-capable missiles have been deployed to Kaliningrad, at the edge of Europe, and President Putin has threatened to match any US missile deployments in Europe.

We urgently appeal for negotiations to preserve and reinforce the INF Treaty; for the adoption of and adherence to no-first-use doctrines; for credible commitments to fulfil the nuclear powers’ Nuclear Non-Proliferation Treaty disarmament obligations; and for nuclear arsenal reductions with savings redirected to address essential human needs. All other nuclear-armed states, including China, should be involved in future INF-related negotiations.

We call on all countries to ratify the Treaty on the Prohibition of Nuclear Weapons, adopted by the UN in 2017, which offers a solid international framework toward the elimination of nuclear weapons.

To avert a new nuclear arms race, we call on people and countries throughout the world to use all political and diplomatic means available to defend the INF Treaty and to work for a nuclear-free world.

Act now in the name of human survival!”